How Airbnb is changing the world of business travel for good

How business travel should change 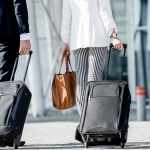 Most hotels are not terrible, but they can definitely be a bit bland. Almost all of them tick the same boxes — comfortable bed, basic bathroom, TV hanging from the wall and a bottle of water on the nightstand. If you’re lucky, breakfast is served with a smile and there’s a fun bar to wind down after a long day of work.

The problem is not that hotels are bad, but just that they often lack character. It’s an impersonal experience, highlighted by crowded check-in desks, boring restaurants and cookie-cutter rooms. After years of being bound to the confines of the traditional hospitality industry, it’s no wonder a new option has been able to kickstart a big shift in business travel.

Since its launch in 2008, Airbnb has quickly became a force to be reckoned with. By creating a marketplace for letting people rent out their own private spaces, there suddenly was a viable alternative for staying in a hotel. Consumers were all over it — not just because it offered a cheaper way to stay in a city, but also because the experience itself was a lot more fun and authentic.

With an estimated 100 million nights booked per year, today Airbnb is a global hospitality juggernaut — and its popularity hasn’t just been limited to consumers. Increasingly, business travelers are also seeing the worth of using Airbnb for their lodging — and in this article we’re taking a closer look at the reasons why.

The rise of the independent business traveler

As we’ve shown in our last article, Do you have a low attachment rate to your corporate booking tool?, lots of companies are ditching central business travel management in favor of having employees book their own trips. This is great for companies because they save money and time on travel management, and it’s great for workers because they can pick and choose every part of their business trip. But when you let people decide some might not want to stay in a hotel — when they book Airbnbs for their private trips, they might prefer it when away for business as well.

The benefits of booking a home instead of a hotel

It’s easy to see that staying in an Airbnb is a much more authentic experience — it’s someone’s house, after all! That’s not the only benefit, however — there are many more reasons why this kind of space can be better than a hotel. For example, you could bring over some colleagues for a quick brainstorm or spend a day working from the apartment — even during times when the local office, coffee shops or other workspaces are closed. Afterwards, why not enjoy cooking a nice meal together? It’s sure to be a boon for team building.

On Airbnb you’ll often find larger, more comfortable spaces at a lower price than what you would get in a hotel — even if you’re booking an entire apartment. This difference becomes even more striking if you’re traveling with a large group — where you normally would have to book separate rooms for everyone, you can now book a large apartment with multiple rooms. Because you’re not paying for the added luxuries of a hotel like 24/7 reception, on-demand room service, an in-house gym and more, Airbnbs are definitely the more financially sound option.

Not only are the places we stay during our travels changing, the way we schedule our trips is too. With more and more people finding out about the pleasures of bleisure travel, Airbnbs offer the perfect opportunity to relax before or after your business trip — with more space and a casual, homely environment it’s possible to bring your family, for example. This makes it easy to take a couple of days off and enjoy the best things of what the destination has to offer. As the boundaries of work and life get increasingly blurred, this counts as a nice perk for those who spend more days abroad than at home, giving them some much-needed time to unwind.

After implementing a variety of business-related features over the years, the company eventually launched a sub-brand called Airbnb for work. It’s been performing extremely well and is constantly being improved with new features that are specifically aimed at a professional audience, like selecting spaces that have desks, great wifi, flexible cancellations and other things teams need to be productive. It’s clear that the company has had a whiff of the massive business market and is now catering directly to them.

This also means that the amount of people using Airbnbs for work travel is only going to grow. With workers discovering the benefits of more laidback lodging and the world’s biggest brand for booking them pushing its user base to try AirBNB for work.

Adapt or die: the new role of the Finance Team in 2020

Technology is changing the structure of companies in all departments, from countability to HR, most of the processes inside corporations are digital nowadays. The time has come to adapt to new tasks that are emerging from disruptive technologies, as well as understand where do finance teams go from

The best 10 podcasts for fintech lovers